Relax, unwind and recharge your body, mind and spirit in this class that combines Restorative Yoga poses and the power of natural crystals to energize, cleanse, restore and renew.

Relax, unwind and recharge your body, mind and spirit in this class that combines Restorative Yoga poses and the power of natural crystals to energize, cleanse, restore and renew. 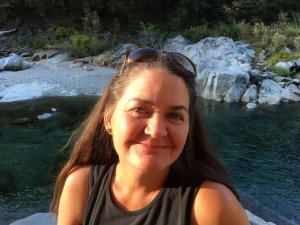 
Ivy Sioux Pera has a BA in Psychology and MFA in Theater. She was  certified by Cheryl Becker of Body Wisdom as Usui Reiki II in 1995. That same year she attended a weekend Yoga course with Ken Scott Nateshvar and Woody Harrelsson, and had a life changing experience of how it was possible to positively influence one’s body using the mind. Following work at The Flower Essence Pharmacy in Portland, Oregon, she studied Tantric yoga in 2001 with Amano Mahima in Marin, California, and Iyengar Yoga with Marsha Mann in 2003, who trained with B.K.S. Iyengar in India.
Continuing her quest to deepen her yoga knowledge and experience, Ivy Sioux traveled the world for nine years, taking classes and workshops wherever she found them. From 2014 – 2016 she continued her studies at Ananda Village, receiving Certifications as a Yoga Teacher, Mediation Teacher, and Restorative Yoga Teacher, and in 2017 was certified as a Trauma Informed Restorative Yoga Teacher by Schuyler Bright in Nevada City.
Her extensive experience and intuitive knowledge gained integrating the power and harmonizing energy of natural crystals with her yoga classes lead to the creation of C-Influence Restorative Yoga (the C stands for Crystals) and the Dance up the Chakras.
Ivy Sioux is currently teaching beginning and advanced restorative yoga and the Dance up the Chakras class  on Wednesdays at Inner Path in downtown Nevada City.
You can get in touch with her through the contact form on her website  3rdForceAltars.com and/or purchase tickets to her classes through BrownPaperTickets.com  available at the Briar Patch for $25

The Presence of Being (On-Line Event)

Dance Up The Chakras
X
Scroll to top